CHANGES TO THE VILLANDRY ESTATE IN THE 18th CENTURY

Until the acquisition of the seigniory of Villandry in 1754 by Count Michel-Ange de Castellane, no notable changes were made to the Renaissance building. The new owner, influenced by neoclassicism, made major changes to the castle and gardens in accordance with the tastes of his time. 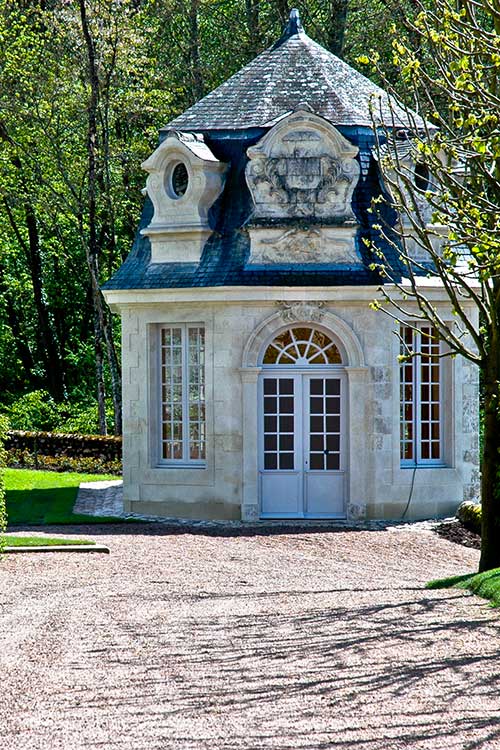 The Pavillon de l’Audience is a charming building built in the 18th century for Michel-Ange de Castellane. He gave audience there. The function gave its name to the building.

The château of Colombiers, commonly known as “Villandry”, acquired by Jean Breton in 1532, was handed down without interruption from descendant to descendant for more than two centuries. In the 17th and 18th centuries, several events came to mark the history of Villandry. In 1619, Balthasar Breton obtained that the castellany become a marquisate. Twenty years later, in 1639, the name “Villandry” was officially substituted for that of Colombiers. On 23 July 1754, Louis-Henri d’Aubigné, Marquis of Villandry, sold the château and lands to Count Michel-Ange de Castellane (1703-1782), ambassador to King Louis XV, who came from a very old and illustrious family of Provençal nobility. The marquisate was rendered null and void by the sale, as the lands changed families, and Villandry was elevated to the title of county by letters patent from the King.

The neo-classical interior of the château

Built during the Renaissance, the castle was cold and uncomfortable. The Count of Castellane successfully remodelled the interior to make it habitable, integrating standards of comfort close to those of today – in particular sound and heat insulation through the installation of wood panelling – while giving it an undeniable charm through the neoclassical style.

Attention is drawn in particular to two elements of the 18th century décor. A very beautiful Louis XV staircase is worth admiring: the initials of Michel-Ange de Castellane are interlaced, on the wrought iron banister on each floor. The dining room, in the Provençal tones dear to Michel-Ange de Castellane, has been classified as a Historic Monument since 1934, as has the staircase.

If the interior modifications made by the new owner are successful, the undertaking was more fraught on the façades. The arcades in the courtyard were walled up and became, on the left, kitchens and, on the right, corridors leading to the salons. The Renaissance windows were rounded off and between them Louis XV style bays were inserted and then fitted with balconies and balustrades, and trompe l’oeil windows were added. It was also during this period that the tower in the main courtyard, which housed the staircase that had been rendered useless by the construction of the internal staircase, disappeared. The façade was distorted by these transformations and the Renaissance château undeniably lost its character as a result.

The gardens of Villandry arranged in the French style

The gardens were also brought up to date. Firstly, the grounds were enlarged by the purchase of land by the Marquis de Castellane in 1760, subsequently laid out in the French style. Rectilinear paths, a water mirror, flowerbeds, orangeries and terraces replaced the Renaissance stands. The charming Pavillon de l’Audience, a counterpart to the pavilion built at the south-east corner of the château, marks the end of the avenue that runs alongside the parterre and the water mirror .

The revolutionary period and the financial difficulties it caused put an end to the presence of the de Castellane family at Villandry, which lasted less than half a century. In 1791, Esprit-François-Henri de Castellane, Michel-Ange’s son, sold the estate – castle, furniture, outbuildings and land – to François Chénais, a merchant from Nantes, for 850,000 pounds

François Chénais made his fortune in coffee plantations in the West Indies and the slave trade. On his return to France, he purchased Villandry. The year 1792 was an annus horribilis for the new lord who saw his investments in the islands destroyed by the revolution in Saint-Domingue and the abolition of slavery. And on top of that, he had to re-pot the orange trees at Villandry. Not without a great deal of procrastination – François Chénais was renowned for his stinginess – he decided to order 250 new wooden boxes for the precious trees when he learned that the Orangery needs major repairs. Feeling trapped, he then sold the magnificent boxes that have just been delivered for a modest sum and had the orange trees uprooted and chopped down for firewood. After this episode, François Chénais felt he must dispose of Villandry as quickly as possible but finding a buyer proved difficult. In debt and overwhelmed, François Chénais sold the estate, estimated at 1,000,000 pounds, to Gabriel-Julien Ouvrard, financier and speculator, for 350,000 pounds in 1800.