Between abandonment and splendour, the uncertain fate of Villandry in the 19th century

Like the political turbulence that animated the 19th century, the history of Villandry is marked by an alternation of troubled and sumptuous periods. The castle was threatened with ruin on several occasions, while the French gardens became a romantic park. Built under a lucky star, Villandry always found a providential owner at the most critical moments. 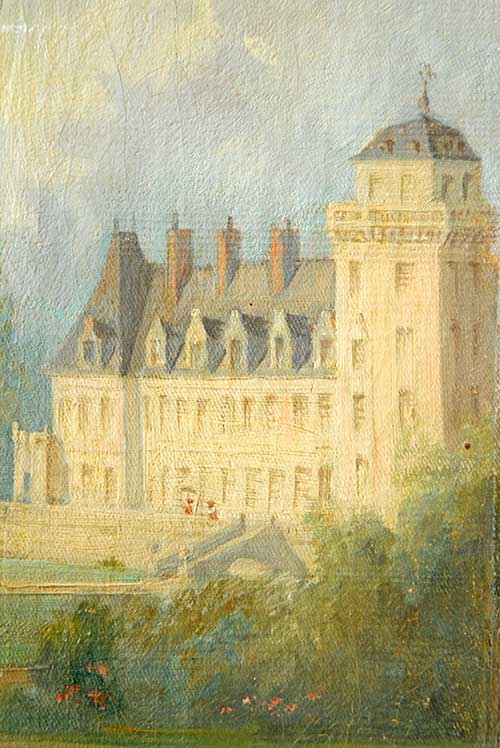 Villandry in the 19th century

The history of Villandry in the 19th century could have been the setting for a novel by Honoré de Balzac, oscillating between spectacular social ascent and dashed hopes.

After belonging to the Castellane family for some forty years, the Château de Villandry and its grounds were sold to François Chénais, a wealthy merchant, in 1791. However, the financial investment required to maintain the property soon proved to be an abyss and François Chénais was forced to sell. Burdened by debts, he sold the estate on 27 Pluviose de l’IX (16 February 1801) at a third of its value to Gabriel-Julien Ouvrard, a financier and speculator, who had acquired numerous châteaux in the Loire Valley, including Azay-le-Rideau. On 2 Germinal of the year XI (23 March 1803), the new owner, involved in activities that were not very legal, had to dispose of some of his property, including Villandry, which fell into the hands of Marc-Antoine-Grégoire Michel, also known as Michel le Jeune, a talented and successful financier who was just as unscrupulous as his predecessor.

At the end of September 1813, Jérôme Bonaparte, Napoleon I’s younger brother, took acquisition of the Château de Villandry and the Château de Stains. He seems motivated by a desire to distance himself from his imperial elder who is about to enter a dark period. The deal was concluded through a nominee, a certain Mr César-Joseph Idlinger. On 6 November 1813, for the sum of 775,000 francs, the sale of the “land and estates of Villandry, Savonnières, Grand Foncher, les Chapitrières, and the outbuildings, plus all the furniture and other effects in the castle” was completed. The following year, Napoleon I abdicated; the imperial family was forced into exile. Jérôme Bonaparte and his wife, Catherine Wurtemberg, wished to settle in Italy. Through Antoine-André Brugière, baron de Sorsum, Prince Jérôme’s chief of staff, and Jean-Jacques Foignet, nominee of Pierre-Laurent Hainguerlot, they concluded an exchange: the Villandry estate and the Château de Stains in exchange for property located in Farnetta, in the principality of Lucca and in Massa-e-Carrara. The agreement was signed on 21 December 1814. But the affair took a completely different turn when the Bonapartes discovered that part of the Italian properties was under sequestration and that they could not therefore take possession of them. Jérôme decided to sue, but the use of nominees complicated the case, which turned into a legal imbroglio that lasted nine years. It was only in 1823 that the oppositions were finally lifted; Villandry, castle and lands, thus officially became the property of Pierre-Laurent Hainguerlot.

Although Jérôme Bonaparte did not enjoy Villandry very much, he left some evidence of his stay, notably through pieces of furniture, including an astonishing pedestal table attributed to the famous Jacob-Desmalter cabinetmaking workshop decorated with Sèvres porcelain medallions on the theme of the arts.

1814-1897: return to stability and splendour thanks to the Hainguerlot family

When Pierre Laurent Hainguerlot (1767-1841) took over Villandry, perhaps as early as 1819, the château and park were suffering a lack of maintenance. In a letter to the prefect of the Indre-et-Loire department dated 15 April 1822, he wrote: “For the past three years, Villandry [n’y a]has seen nothing but masonry tools to raise from the ruins a monument that I have preserved for Touraine”.
The château was repaired and maintained its appearance, although a transformation project was commissioned, as documented in the archives.

From 1841, Villandry was in the hands of Georges-Tom Hainguerlot (1795-1868), son of Pierre-Laurent, made a baron by Charles X, husband of Stéphanie Oudinot (1808-1893), daughter of the marshal of the Empire, Nicolas Charles Oudinot. This was a prosperous period for the estate. The Hainguerlot family lived in Paris and visited Villandry for long stays, which were synonymous with hunting parties and sumptuous celebrations, which were renowned in high society and reported in the national press.

“Mr. and Mrs. Hainguerlot, accompanied by some of the members of the Blount family, settled down at their castle of Villandry, one of the residences of the Indre-et-Loire made most popular by engraving and photography. Their presence, signalling receptions and hunts, brings great and beneficial activity to this corner of Touraine. ” (La Liberté, “Tablettes parisiennes”, 27 November 1869)

Villandry is a famous château in Touraine, much visited by travellers who have left us some charming accounts.
In a short story written by Eugénie Foa, published in the children’s magazine “Le Journal des Enfants” in the second quarter of the 19th century, one can read this short description of the gardens of Villandry:
“I have never been to Villandry, and yet they say that the castle is so beautiful to look at that I would like to visit it […]
[…] The next day, on a fine winter’s day, [ils] [they] set off to visit Villandry. The castle was not then in the best of finery; its bare trees did not offer walkers those long shady alleys which make it one of the most delightful castles in Touraine. […] As compensation, we had the terraces, from which we enjoyed a delightful view and which, on that day, served as a promenade for several visitors.”
Journal des enfants, rééd. 1856, p. 180

Georges-Tom Hainguerlot is surely at the origin of the stylistic revolution applied to the French garden of the Marquis de Castellane. In the 19th century, the French style, which was considered outdated, was abandoned in favour of the English style, which was characterised by curves, valleys, lawns and free vegetation; in addition, this made the cost of maintaining a landscape park much less expensive. The landscaping of the park was entrusted to André Leroy, a nurseryman and landscape gardener from Angers who had been active in western France since the 1840s.

Georges-Tom Hainguerlot was also involved in the life of the village and was its mayor for several years. His wife, Stéphanie Oudinot, contributed to the preservation of the medieval church and had it fitted with a gallery organ. The couple had three children: Edouard, Charles Arthur and Alfred. Only the youngest was a regular at Villandry, his brothers preferring life in Paris. However, in the aftermath of the bitter French defeat by the Prussian army, it was Edouard who received Emperor Frederick II during his visit to Villandry in the spring of 1871.

After the death of Stéphanie Oudinot, the estate was sold by auction to the youngest of the siblings, Alfred Hainguerlot in 1894.

Four years later, in 18985, Villandry is put up for sale. The estate was bought on 30 December 1900 by François-Pierre Le Roux, who saved the château from being dismantled. A physicist and pharmacist, this scientist planned to take advantage of the waterfalls to set up a factory to manufacture pharmaceutical products, but the project had to be abandoned and the estate was once again put up for sale. Once again, the castle and park showed alarming signs of neglect and the castle was soon converted into a stone quarry. It was saved in extremis by the purchase of Joachim Carvallo and Ann Coleman, who were seduced by the property on their first visit.

A very nice description of Villandry in 1883 can be found in the Carnet Mondain.

It is a celebration today at the castel of Villandry, one of the most picturesque seigneurial residences in the beautiful region of Touraine. M. le baron de Nexon, captain of dragoons marries Miss Hainguerlot […].
Situated on the banks of the Cher, only a few metres from the point where the Cher flows into the Loire, the buildings of Villandry recall, by their rare elegance, the most brilliant periods of the Renaissance.
By a strange coincidence, they were built by a king’s moneyer, at the very time when the banker Hainguerlot, the first of his name, had the honour of advancing considerable sums to his king, François I, for the ransom of the defeated of Pavia. Finance also has its ancestors.
Leaning against the hill, the castle of Villandry seems to be “as one with” it, as the succession of its balusters and terraces harmonizes happily with the natural slope of the hillside. Bright waters flowing from an artesian well, the most abundant of all those in Touraine, bathe the feet of the keep, as if to attest that the golden wand is the last wand of the vanished fairy-tales: The park is of rare beauty, and England would envy its expensively maintained lawns.
Villandry recently belonged to the Hainguerlots, who acquired it from the Bonapartes, who themselves bought it from the Castellanes. […]
After the ceremony, lunch for one hundred and fifty guests in the château’s vast dining room; […], coach to the next station, bound for Italy, where the newlyweds will see the sun again, which has been sulking for three months in what the poets have called “the Garden of France”.
(Le Gaulois: littéraire et politique, “Bloc-Notes Parisien”, 17 January 1883)