Joachim Carvallo and Ann Coleman restore the château of Villandry

“I was near Lyon when I heard about this property. I came to visit it. It was lost in a forest of trees and greenery (…). [Il]But overall it appealed to me. The price didn’t seem over the top. The contract was signed there and then. » (1) 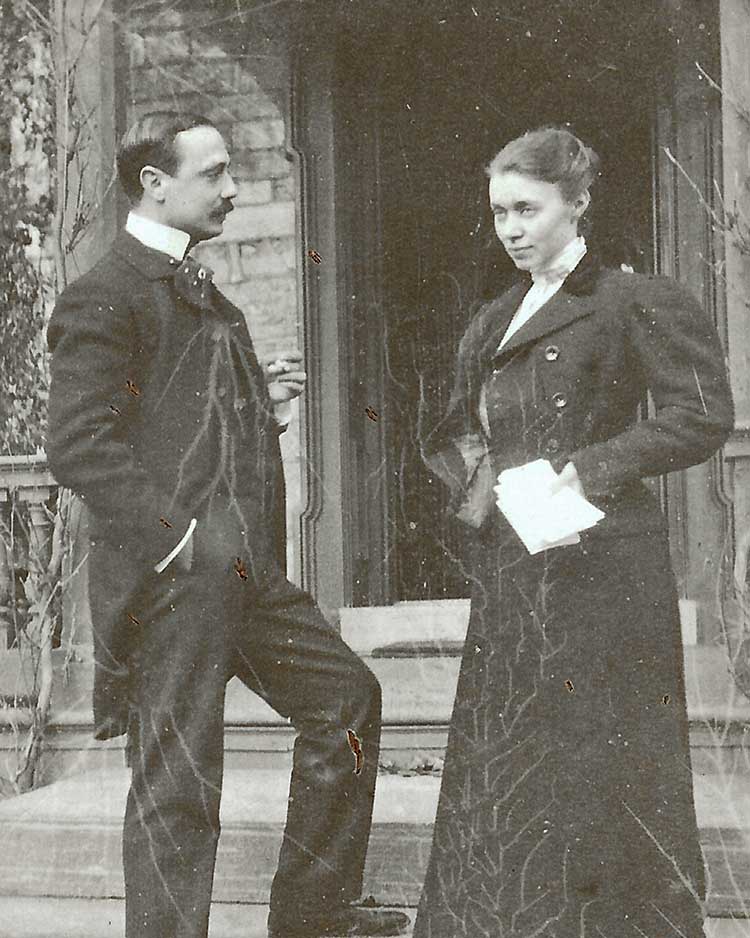 This family photo is a portrait taken in the United States of the newly engaged young couple.

Villandry is restored to its Renaissance splendour

When Joachim Carvallo (1869-1936) and his wife Ann Coleman discovered Villandry, they were visiting an estate whose past glory had to be imagined. The place had not been properly maintained for almost ten years. The castle was threatened with demolition and the grounds abandoned.

Joachim Carvallo was a doctor and researcher originally from Spain, married to Ann Coleman, also a scientist and the heiress of wealthy American iron and steel magnates. Joachim Carvallo was passionate about paintings, especially from Spain, and amassed a large collectionfor which he needed a home. This was what initially led him to visit Villandry in 1906. The couple was immediately seduced by the old-fashioned charm of the property. For the sum of 120,000 francs, the deal was concluded immediately.

Leaving the laboratories of the Faculty of Medicine in Paris where, as a favourite disciple of Professor Charles Richet (Nobel Prize 1913), he was conducting advanced research on the physiology of digestion, Joachim Carvallo now devoted all his energy and fortune to restoring Villandry to its original state. He writes in his memoirs that “when [il]came into possession of this estate, [il]understood the importance of the work to be undertaken and the need to follow a serious method to carry out this work. ” Indeed, The Renaissance château had lost its character as a result of the architectural alterations carried out in the 18th century.

Joachim Carvallo was the inventor of radiochronophotography? Since the end of the 19th century, scientists had been experimenting with various techniques to capture the movements of the organs of the human body. New techniques such as radiography, photography and film were opening up new perspectives. By combining radiography and X-rays, Joachim Carvallo made it possible for the first time to see the different phases of the digestion of birds.

As a true scientist, he drew up the following plan:

After a period of observation necessary to understand the spirit of Villandry, the work began. Supported by a team of 100 masons, Joachim Carvallo succeeded in restoring the façades to their Renaissance beauty.

"The effect of the initial transformations was astonishing. In less than a week, Villandry had regained its Renaissance character. I invited the members of the Touraine Archaeology Society to come and view the work I had carried out. These gentlemen, who were accustomed to seeing Villandry covered in false windows, giving it the sad and dreary appearance of a barracks, were filled with wonder; they couldn't believe their eyes and thought that, with the wave of a magic wand, I had built a new château." (2)

Joachim Carvallo devoted the rest of his life to the restoration of Villandry. After the château, he undertook a complete transformation of the landscaped grounds to create a planted setting in harmony with the mineral architecture. His heirs, François, Robert, and now Henri Carvallo, continue the work of their grandfather and maintain with the same passion the château and its gardens, which have been open to the public since 1920, thus preserving the family aspect that has characterized the residence since its construction in 1532.